Al-Qaeda in Iraq (a.k.a. Islamic State in Iraq and Greater Syria)

Al-Qaeda in Iraq (AQI), a jihadist group of predominantly Sunni fighters, rose to prominence in the ashes of the U.S.-led invasion to oust Saddam Hussein. The insurgency that followed provided the group with fertile ground to wage a guerilla war against coalition forces and their domestic supporters. In the face of successful U.S. counterterrorism efforts and the Sunni tribal awakening, AQI’s campaign of violence has diminished since peak years of 2006 and 2007, but the group remains a threat to stability in Iraq and the broader Levant.

Since the complete withdrawal of U.S. forces in late 2011, AQI has accelerated the pace of attacks on mainly Shiite targets in what analysts say is an attempt to reignite conflict between Iraq’s Sunni minority and the Shiite-led government of Nuri al-Maliki. Meanwhile, the militant group has expanded its reach into neighboring Syria, where it has forged ties with Jabhat al-Nusra, a Sunni militant faction providing tactical support to the insurrection against the Assad regime. In April 2013, the two groups formally merged into the Islamic State in Iraq and Greater Syria. 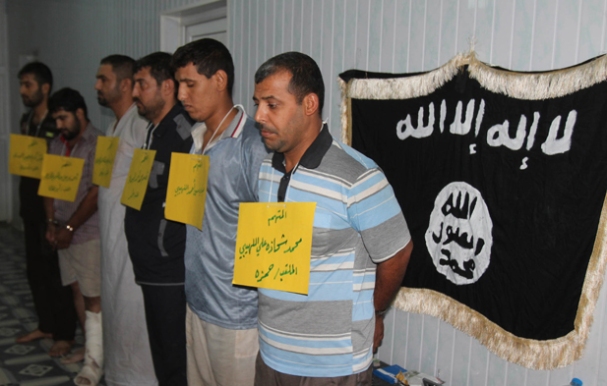 Al-Qaeda in Iraq, also known as the Islamic State in Iraq and Greater Syria (in Arabic: al-Dawla al-Islamiyya fi al-‘Iraq wa-l-Sham), is a Sunni Muslim extremist group that seeks to sow civil unrest in Iraq and the Levant, with the aim of establishing a caliphate–a single, transnational Islamic state based on sharia law. Established by Abu Musab al-Zarqawi, an Arab of Jordanian descent, AQI rose to prominence after the U.S.-led invasion of Iraq in 2003. Zarqawi, after being released from a Jordanian prison in 1999, commanded volunteers in Herat, Afghanistan, before fleeing to northern Iraq in 2001. There he joined with Ansar al-Islam (Partisans of Islam), a militant Kurdish separatist movement, where he led the group’s Arab contingent. Many analysts say this group, not al-Qaeda, was the precursor to AQI.

Ahead of the 2003 invasion, U.S. officials made a case before the UN Security Council linking AQI with Osama bin Laden. But a number of experts say it wasn’t until October 2004, when Zarqawi officially vowed obedience to the al-Qaeda leader, that the groups became linked. The U.S. State Department designated AQI a Foreign Terrorist Organization that same month.”For al-Qaeda, attaching its name to Zarqawi’s activities enabled it to maintain relevance even as its core forces were destroyed [in Afghanistan] or on the run,” observed Brian Fishman, a counterterrorism fellow at the New America Foundation.

According to a 2011 report by the Center for Strategic and International Studies, Zarqawi had prepared carefully for the invasion, developing a four-pronged strategy (PDF) to defeat the coalition: isolate U.S. forces by targeting its allies; discourage Iraqi collaboration by targeting government infrastructure and personnel; target reconstruction efforts through high-profile attacks on civilian contractors and aid workers; and draw the U.S. military into a Sunni-Shiite civil war by targeting Shiites.

Two decisions made by the Coalition Provisional Authority (CPA)–the transitional government established by the United States and its coalition partners–early in the U.S.-led occupation are often cited by some critics as factors that helped feed the insurgency and provide breeding ground for AQI and several other Sunni extremist groups in Iraq. CPA order number one banned members of Saddam Hussein’s Ba’ath Party from all government positions; number two disbanded the Iraqi army and security services, creating hundreds of thousands of new coalition enemies, many of them armed.

In July 2005, bin Laden and his number two at the time, Ayman al-Zawahiri, believed AQI’s increasingly sectarian attacks on Shiites would erode public support for al-Qaeda in the region, and questioned Zarqawi’s strategy in written correspondence. Fishman says the relationship eventually broke down when Zarqawi ignored al-Qaeda instructions to stop attacking Shiite cultural sites. However tenuous the relationship between the al-Qaeda core and its Iraq affiliate, it ended in June 2006, when a U.S. air strike killed the AQI founder. The hit marked a major victory for U.S. and Iraqi intelligence, and a turning point for the organization.

In the aftermath, Abu Ayyub al-Masri, an Egyptian-born explosives expert and former confidant of al-Qaeda deputy Zawahiri, emerged as the group’s new leader. In October 2006, Masri established the Islamic State of Iraq to increase the terrorist’s group local appeal and embody its “caliphate,” or political arm. An Iraq native, Abu Omar al-Baghdadi, was placed at ISI’s helm. For a while, U.S. officials believed Masri and Baghdadi might be the same person, but in April 2010 the White House ended the confusion, announcing that an Iraqi-led operation killed both men near Tikrit.

Shortly thereafter, an Iraqi from the town of Samarra, Ibrahim Awwad Ibrahim Ali al-Badri (aka Abu Du’a) was selected to lead AQI. The U.S. Department of State officially designated Abu Du’a a terrorist in October 2011, and offers a reward of $10 million for information on his whereabouts.

Experts say supporters in the region, including those based in Jordan, Syria, and Saudi Arabia, provided the bulk of past funding. Prior to his death, a great deal of operational funding was provided by Zarqawi’s support network. AQI has also received financing from Tehran (despite the fact that al-Qaeda is a Sunni organization), according to documents confiscated in 2006 from Iranian Revolutionary Guards operatives in northern Iraq.

But the bulk of al-Qaeda’s financing, experts say, comes from internal sources like smuggling, extortion, and other crime. AQI has relied in recent years on funding and manpower from internal recruits (PDF). Online correspondence from the group in mid-2011 indicated a particularly grim financial situation. A web administrator solicited new fundraising ideas and appealed to potential benefactors for money to “feed the widows and the orphans” of resistance.

The makeup of AQI has evolved greatly over the years, transitioning from a group with a significant ratio of foreign fighters–many drawn initially from Zarqawi’s networks (PDF) in Pakistan and Afghanistan, and later merged with recruits from Syria, Iraq, and its neighbors–to a group dominated by native Iraqis. The Washington Post reported that 2006 marked a year of “dramatic changes” in AQI membership, shifting it from a predominantly foreign force to an “overwhelmingly Iraqi organization.”

Experts note that it’s difficult to assess AQI’s size, and approximations have fluctuated greatly over the years. Terrorism analysts estimated some 15,000 fighters before numbers dropped off precipitously with the onset of the Sunni tribal backlash in 2006 and the U.S. troop surge of 2007. According to CSIS, more than 11,000 AQI fighters were killed or captured by early 2008.

As the Pentagon prepared to withdraw its final contingent of troops in late 2011, defense officials estimated AQI had some 800 to 1,000 fighters remaining. However, less than a year later, Iraqi officials said AQI ranks doubled to some 2,500, noting that counterterrorism operations “had been negatively affected by the U.S. pullout.”

The Pentagon captured dozens of senior AQI leaders during the nearly nine-year war in Iraq, and U.S. officials predicted the group’s demise. Ryan Crocker, the former U.S. ambassador to Iraq, told reporters in October 2007 that “al-Qaeda simply is gone” from Fallujah, Ramadi, and other parts of Anbar province. In mid-2008, CIA Director Michael Hayden suggested al-Qaeda was on the verge of defeat in Iraq. However, history has shown the group to be extremely resilient. “I cringe whenever anybody makes a pronouncement that al-Qaeda is on its last legs,” said the Pentagon’s top spokesman in Iraq in November 2011.

Many analysts say heavy-handed actions taken by the Maliki government to consolidate power in the wake of the U.S. withdrawal have alienated much of the Sunni minority and provided AQI with potent propaganda. In February 2012, a spokesman for AQI warned of the coming battle between the two branches of Islam: “The war of the Sunnis with the [Shiites] is a religious war, a holy war of faith, a war of faith and unbelief, a war of idolatry and monotheism. There is no way out of it and there is no swerving from it. The [Shiites] know this well.”

In 2012 and early 2013, violence attributed to AQI intensified, highlighting the group’s attempts to exploit widening sectarian cleavages. According to a report by the Congressional Research Service (PDF), there were roughly a dozen days in 2012 on which the group executed multi-city attacks that killed at least twenty-five Iraqis. On at least four of those days, coordinated attacks left more than 100 Iraqis dead. And violence has seen an uptick since Sunni protests in Anbar and other provinces began in December 2012. Most Sunnis have denounced the bloodshed.

Meanwhile, civil unrest in neighboring Syria is drawing AQI fighters across the border to join the rebellion against the regime of Bashar al-Assad, which is dominated by the Alawite sect, a minority Shiite group. As an indication of the cross-border alliance, the State Department amended its terrorist designation of AQI to include Jabhat al-Nusra (“The Victory Front”), labeling the Syrian militant group an alias organization with shared leadership. In 2012, the group claimed responsibility for roughly six hundred attacks in several major Syrian cities, including Damascus, Aleppo, Hama, Deraa, and others.

In April 2013, AQI chief Abu Du’a confirmed Western suspicions of the group’s links to Sunni jihadists fighting in the Syrian conflict, announcing AQI’s union with al-Nusra. Meanwhile, the security situation in Iraq continued to erode. Analysts estimated that more than three thousand people were killed in sectarian violence in the three months following the groups’ merger. In July, AQI fighters orchestrated bold attacks on two prisons outside Baghdad (Abu Ghraib and Taji) that freed more than 500 inmates, including top al-Qaeda militants. Interpol described the incidents as “a major threat to global security.”

Washington has responded to al-Qaeda’s resurgence in the region by increasing the CIA’s support for the Maliki government, including assistance to elite counterterrorism units that report directly to the prime minister. At the same time, the significant jihadist spillover into Syria has given the Obama administration pause as it moves to provide limited arms to the Sunni rebellion against Assad. Briefing the UN Security Council in July 2013, UN envoy to Iraq Martin Kobler characterized the spiraling regional dynamics: “[Iraq and Syria] are interrelated. Iraq is the fault line between the Sunni and Shi’a world.”