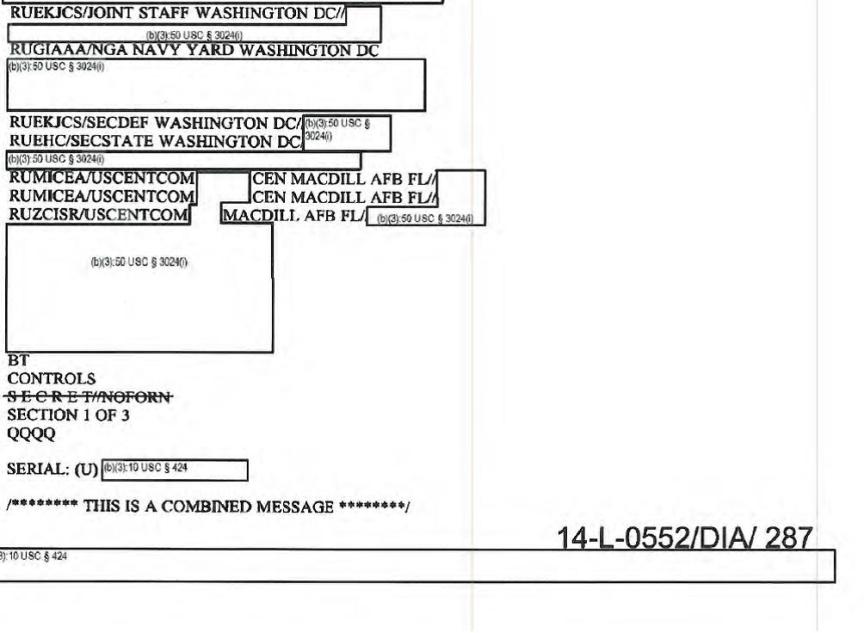 On Monday, May 18, the conservative government watchdog group Judicial Watch published a selection of formerly classified documents obtained from the U.S. Department of Defense and State Department through a federal lawsuit.

While initial mainstream media reporting is focused on the White House’s handling of the Benghazi consulate attack, a much “bigger picture” admission and confirmation is contained in one of the Defense Intelligence Agency documents circulated in 2012: that an ‘Islamic State’ is desired in Eastern Syria to effect the West’s policies in the region.

Astoundingly, the newly declassified report states that for “THE WEST, GULF COUNTRIES, AND TURKEY [WHO] SUPPORT THE [SYRIAN] OPPOSITION… THERE IS THE POSSIBILITY OF ESTABLISHING A DECLARED OR UNDECLARED SALAFIST PRINCIPALITY IN EASTERN SYRIA (HASAKA AND DER ZOR), AND THIS IS EXACTLY WHAT THE SUPPORTING POWERS TO THE OPPOSITION WANT, IN ORDER TO ISOLATE THE SYRIAN REGIME…”.

The DIA report, formerly classified “SECRET//NOFORN” and dated August 12, 2012, was circulated widely among various government agencies, including CENTCOM, the CIA, FBI, DHS, NGA, State Dept., and many others.

The document shows that as early as 2012, U.S. intelligence predicted the rise of the Islamic State in Iraq and the Levant (ISIL or ISIS), but instead of clearly delineating the group as an enemy, the report envisions the terror group as a U.S. strategic asset.

While a number of analysts and journalists have documented long ago the role of western intelligence agencies in the formation and training of the armed opposition in Syria, this is the highest level internal U.S. intelligence confirmation of the theory that western governments fundamentally see ISIS as their own tool for regime change in Syria. The document matter-of-factly states just that scenario.

Forensic evidence, video evidence, as well as recent admissions of high-level officials involved (see former Ambassador to Syria Robert Ford’s admissions here and here), have since proven the State Department and CIA’s material support of ISIS terrorists on the Syrian battlefield going back to at least 2012 and 2013 (for a clear example of “forensic evidence”: see UK-based Conflict Armament Research’s report which traced the origins of Croatian anti-tank rockets recovered from ISIS fighters back to a Saudi/CIA joint program via identifiable serial numbers).

The newly released DIA report makes the following summary points concerning “ISI” (in 2012 “Islamic State in Iraq,”) and the soon to emerge ISIS:

The following is excerpted from the seven page DIA declassified report (http://www.judicialwatch.org/document-archive/pgs-287-293-291-jw-v-dod-and-state-14-812-2/):

A. INTERNALLY, EVENTS ARE TAKING A CLEAR SECTARIAN DIRECTION.

B. THE SALAFIST [sic], THE MUSLIM BROTHERHOOD, AND AQI ARE THE MAJOR FORCES DRIVING THE INSURGENCY IN SYRIA.

C. THE WEST, GULF COUNTRIES, AND TURKEY SUPPORT THE OPPOSITION; WHILE RUSSIA, CHINA AND IRAN SUPPORT THE REGIME.

3. Al QAEDA – IRAQ (AQI):… B. AQI SUPPORTED THE SYRIAN OPPOSITION FROM THE BEGINNING, BOTH IDEOLOGICALLY AND THROUGH THE MEDIA…

4.D. THERE WAS A REGRESSION OF AQI IN THE WESTERN PROVINCES OF IRAQ DURING THE YEARS OF 2009 AND 2010; HOWEVER, AFTER THE RISE OF THE INSURGENCY IN SYRIA, THE RELIGIOUS AND TRIBAL POWERS IN THE REGIONS BEGAN TO SYMPATHIZE WITH THE SECTARIAN UPRISING. THIS (SYMPATHY) APPEARED IN FRIDAY PRAYER SERMONS, WHICH CALLED FOR VOLUNTEERS TO SUPPORT THE SUNNI’S [sic] IN SYRIA.

7. THE FUTURE ASSUMPTIONS OF THE CRISIS:

A. THE REGIME WILL SURVIVE AND HAVE CONTROL OVER SYRIAN TERRITORY.

B. DEVELOPMENT OF THE CURRENT EVENTS INTO PROXY WAR: …OPPOSITION FORCES ARE TRYING TO CONTROL THE EASTERN AREAS (HASAKA AND DER ZOR), ADJACENT TO THE WESTERN IRAQI PROVINCES (MOSUL AND ANBAR), IN ADDITION TO NEIGHBORING TURKISH BORDERS. WESTERN COUNTRIES, THE GULF STATES AND TURKEY ARE SUPPORTING THESE EFFORTS. THIS HYPOTHESIS IS MOST LIKELY IN ACCORDANCE WITH THE DATA FROM RECENT EVENTS, WHICH WILL HELP PREPARE SAFE HAVENS UNDER INTERNATIONAL SHELTERING, SIMILAR TO WHAT TRANSPIRED IN LIBYA WHEN BENGHAZI WAS CHOSEN AS THE COMMAND CENTER OF THE TEMPORARY GOVERNMENT.

8.C. IF THE SITUATION UNRAVELS THERE IS THE POSSIBILITY OF ESTABLISHING A DECLARED OR UNDECLARED SALAFIST PRINCIPALITY IN EASTERN SYRIA (HASAKA AND DER ZOR), AND THIS IS EXACTLY WHAT THE SUPPORTING POWERS TO THE OPPOSITION WANT, IN ORDER TO ISOLATE THE SYRIAN REGIME, WHICH IS CONSIDERED THE STRATEGIC DEPTH OF THE SHIA EXPANSION (IRAQ AND IRAN)

8.D.1. …ISI COULD ALSO DECLARE AN ISLAMIC STATE THROUGH ITS UNION WITH OTHER TERRORIST ORGANIZATIONS IN IRAQ AND SYRIA, WHICH WILL CREATE GRAVE DANGER IN REGARDS TO UNIFYING IRAQ AND THE PROTECTION OF ITS TERRITORY.

1 Response to 2012 Defense Intelligence Agency document: West will facilitate rise of Islamic State “in order to isolate the Syrian regime”