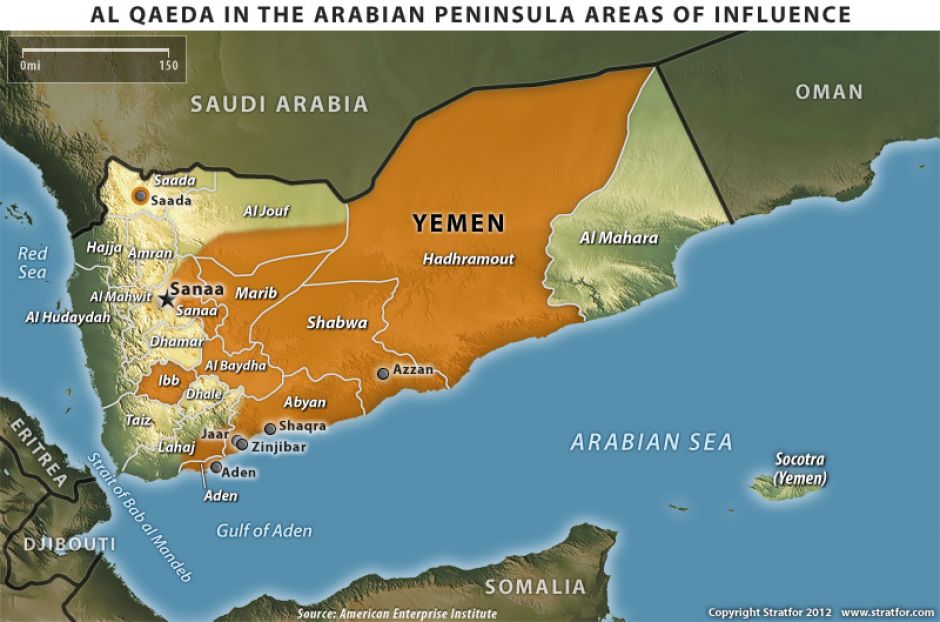 Despite the fact that al-Qaeda is responsible for the deadliest attack on U.S. soil, and that dismantling the terror apparatus was Washington’s primary motive for occupying Afghanistan, the burgeoning of al-Qaeda in the Arabian Peninsula (AQAP) is a development that has eluded much of the American public. Yet, since the Saudi Arabian-led military coalition launched “Operation Decisive Storm” on March 26 of this year, Osama bin Laden’s former cohorts in AQAP have effectively transformed their organization into an occupying militia. This development has largely escaped the U.S. mainstream media’s radar. Lacking significant oil reserves, Yemen has not experienced an influx of wealth as have neighboring Saudi Arabia and other nearby Gulf Cooperation Council (GCC) states. As a result, it has become increasingly insular. Yemen has long attracted Sunni revivalists and assorted religious purists. The Yemeni strain of Arabic is believed to be the closest to that spoken during the times of the Prophet.17 Those with an especially austere, fundamentalist vision of Islam have flocked to Yemen believing that the area remains uncorrupted. The world’s most reactionary Sunni Muslims (frequently labeled Wahhabis or Salafists) share a special reverence for their vision of the early Muslim caliphate. Those who migrate to Yemen on these grounds do so to invoke the past and to promote a revival of their absolutist interpretation of Islam. AQAP’s strong presence in Yemen long predates the country’s 2011 breakdown of civil authority, when the group constituted more of a hostile nuisance than a martial threat. According to reports, the al-Qaeda branch began germinating in the Arabian Peninsula during the 1990s and gradually rose to prominence as a regular instigator of violence following the escalation of Washington’s war on terror during the 2000s.18

Fertile Land for Global Jihadists This unique situation drew Anwar al-Awlaki, the influential preacher and al-Qaeda recruiter, to Yemen in 2004. Hardline jihadists view the impoverished country as fertile ground in an ideological sense, while petroleum speculators have long regarded Yemen as barren. American-born Anwar al-Awlaki was a gifted agitator for Sunni jihadism, speaking English fluently in addition to commanding a poetic grasp of Arabic. He ultimately chose Yemen in which to exhibit his disreputable talents, which included the skill of attracting Anglophone recruits. Al-Awlaki’s relocation to Yemen was part of a greater tide, one that has been met with increasing retaliation from both U.S. intelligence and Yemen’s local authorities. Drone strikes in Yemen became common early in the Obama administration, one of which killed al-Awlaki in 2011.19 Certain analysts suggested that the al-Qaeda recruiter became a regional commander within AQAP and was instrumental in overseeing the logistics of terror attacks, including the failed explosion aboard Northwest Airlines Flight 253.20 Despite his ignominious death, al-Awlaki’s presence still lingers in the jihadist psyche. Yemen’s collapse into civil war was a catalyst for AQAP’s regional ambitions, plans that would have likely remained unrealized had the country not splintered itself into mutually antagonistic pieces. Evidence suggests that hundreds of foreign jihadists have filtered into Yemen since unified rule collapsed in 2011, drawn by the opportunities presented by a fractured central government in a failed state awash with arms caches.21 In a series of decisive skirmishes, AQAP began rapidly claiming territory outside of major cities and overcoming government forces. As of July 2015, AQAP holds terrain in the northern hinterlands of the Hadramaut Governorate (situated along the Saudi Arabian border) and in much of the Abyan Governorate (situated along Yemen’s southern coast).22,23 Al-Qaeda’s growing control in Yemen can be compared to the rise of AQAP’s Syrian counterpart, Jabhat al-Nusra, and of Daesh (“Islamic State”), which followed the rebellion against the Damascus regime in 2011. One of the interesting components of the jihadists’ shift in priorities is the diminished emphasis on attacking the West. The previous generation of terror organizations have transformed from sleeper cells and shadow elements into openly declared militias. The focus of their aggression has been capturing and occupying contested territories in failed states. As a result, violence against the West is often waived off to copycats and supporters in Europe and North America determined to execute improvised lone wolf attacks. In recent weeks, AQAP has doubled down on this tactic, issuing two proclamations in early August that praised lone-wolf style attacks and exhorted aspiring jihadists to “strike America in its own home and beyond.”24 In an extension of this doctrine, the organization has prioritized planned terror attacks in areas they hope to directly influence. AQAP’s bombings appear localized and often symbolic with an August 6 attack obliterating a 700-year old Sufi mosque in the Yemeni province of Lahj.25 In this case the perceived enemy is close both in terms of geography and religion with the target being a mystical order of Islam that is heretical according to AQAP’s worldview. In contrast to the more reckless jihadi groups claiming territory in Syria and Iraq, AQAP’s style of operations appears more measured and procedural. They are less prone to the abrupt gains and losses that have characterized Daesh’s campaigns. Keeping in mind that Yemen is a different theater than the Levant, AQAP’s expansion in the area has been one of gradual encroachment. Yet, like Daesh, AQAP is comprised of opportunists, though they seem much more astute at calibrating logistical boundaries. In contrast to the recent blindsiding of Daesh at the hands of Kurdish Peshmerga fighters, AQAP appears less likely to overextend itself. AQAP’s Prospects in Yemen The return of a unified civil authority in Yemen would serve as the most effective counter to AQAP’s expansion. Unfortunately, all signs point to this being unlikely in the immediate future. Terror organizations by definition function in the least observable fringes, generally being unable to expose themselves in the face of disciplined martial and policing oversight. AQAP appears to have picked up steam in Yemen because their status as marginal figures has enabled them to bide their time and emerge only when more powerful factions with governmental roots began engaging one another. Corralling al-Qaeda’s Yemeni branch has become less of a priority for locals now that Sunni and Shi’ite/Zaydi factions have turned their guns upon each other. Saudi Arabia’s military incursion into Yemen bodes poorly for the defeat of AQAP. Riyadh’s aggression breaks down largely along sectarian lines, with their hostility focused primarily on the Houthi rebels. Recent evidence suggests that AQAP has become an ally of convenience for the House of Al Saud, with terrorist militants fighting alongside Saudi-backed militias during open skirmishes.26 As long as al-Qaeda remains antagonistic toward the local Shi’ite/Zaydi Muslims of Yemen, AQAP will remain well out of Saudi Arabia’s line of fire. Abd Rabbuh Mansur Hadi, the president of Yemen’s ousted government, currently rules in exile from Riyadh. His ongoing protection under the Saudi banner practically guarantees that the Houthis will have to contend with AQAP as a tactical ally of the kingdom. Unless the Houthis and their Sunni enemies reach a détente, or one side scores a decisive victory on the ground, AQAP is well poised to continue asserting control over portions of territory in Yemeni hinterlands by simple virtue of exploiting the martial chaos. Peace by any means would constitute the clearest threat to AQAP’s power because this would force local Sunnis to contend with pressure from Washington to either suppress or eliminate the al-Qaeda branch. Considering that the crisis in Yemen is escalating by the day, however, al-Qaeda is likely to sustain its position as a major power in the war-torn country, a thorn in the side of Houthi rebels, and a beacon for militant jihadists.

1 Response to AL-QAEDA’S OUTLOOK IN YEMEN