Posted on September 3, 2015 by CHAINSOFF

20committee
Today the office of Ukrainian President Petro Poroshenko released via Twitter important details about the organization and structure of Russia’s occupying army in Southeastern Ukraine. The order of battle (ORBAT) information is clearly derived from a lot of intelligence, especially SIGINT

Since most of readers know neither Russian or Ukrainian, author passing this to what Kyiv has released today in English. The translation isn’t great but it works. Comments below for most normals are not well acquainted with the nuances of Russian military organization. 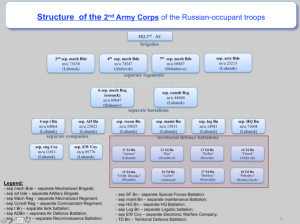 The organization of the 1st and 2nd Corps, no surprise, corresponds exactly to the standard tables of organization and equipment (TO&E) of Russian Ground Forces. There are several maneuver brigades (“motor rifle” is the Russian term for mechanized in NATO parlance) supported by independent regiments and battalions. As Kyiv has announced, the 35,000 troops belonging to “DNR” and “LNR” forces are bolstered by 9,000 reservists. While some forty percent of the troops are locals, the rest are Russians plus a few mercenaries and foreign volunteers.

The senior command staff are exclusively Russian officers assigned to the 1st and 2nd Corps — officially they are “not there” of course — while the operation is run, logistically and command-wise, from neighboring Russia.

To anybody with a decent memory, this closely resembles the relationship during the 1992-95 Bosnian War, when the Bosnian Serb Army (VRS), while consisting largely of local rank-and-file troops, had most of its command, and nearly all of its financing and logistics, coming from neighboring Serbia and its military — which, in practice treated the VRS as merely as an extension of itself, as in fact it was.

Needless to add, the “DNR” and “LNR” militaries would not last twenty-four hours without constant command and logistical support from Putin’s military. They are an extension of Russian Ground Forces and should be treated as such by the West. It’s time to end, once and for all, any fiction about “rebels” — these are Russian-controlled forces, led by Russian officers, supplied with Russian guns and ammunition, that are waging war inside Ukraine.

Kudos to Kyiv for putting this important information out there as an aid to understanding what’s really going on in their country.

1. AKA Sedov; GenCol is a Russian “three-star” rank.

3. AKA Morgun; GenMaj is a Russian “one-star” rank.

Collecting, translating, producing, and disseminating open source information that meets the needs of policymakers, the military, state and local law enforcement, operations officers, and analysts through-out Governments.
View all posts by CHAINSOFF →
This entry was posted in Uncategorized and tagged CIA, Department of Homeland Security, DIA, Director of the Central Intelligence Agency, State Department, The Intelligence Community. Bookmark the permalink.