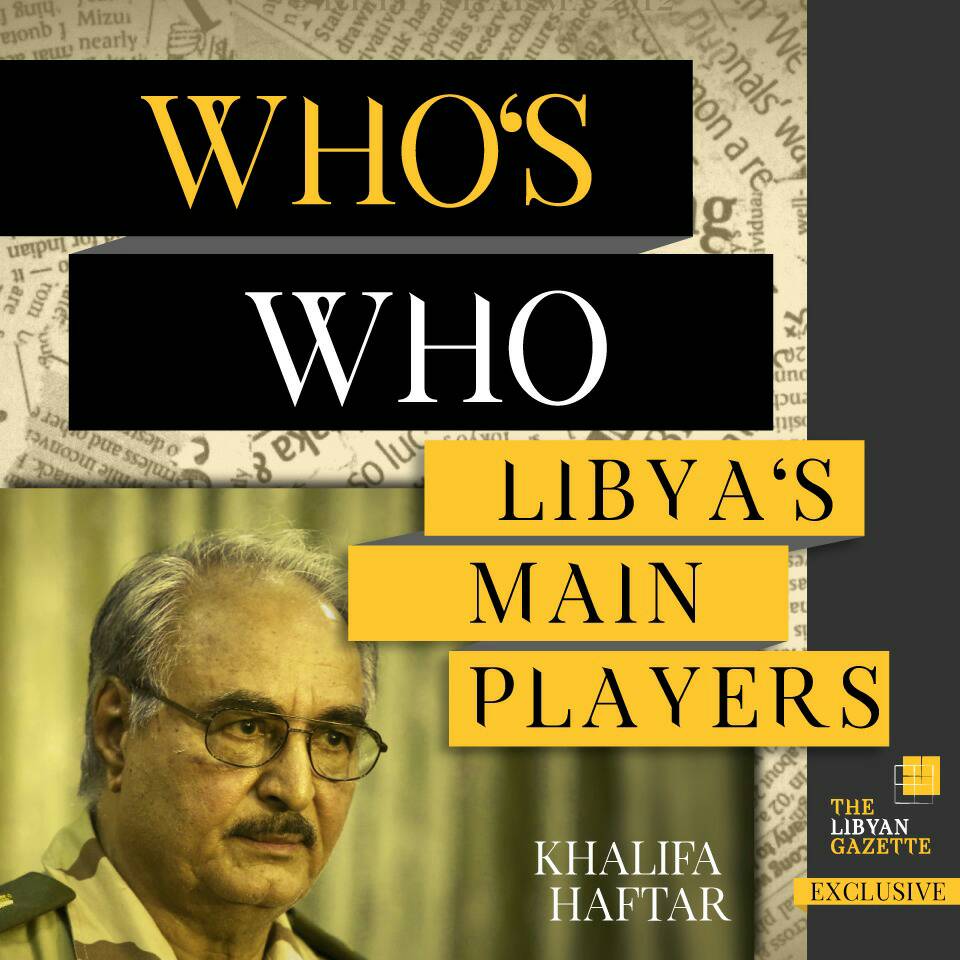 General Khalifa Haftar has been part of the Libyan political arena for more than four decades and continues to be a polarizing figure in Libya. The self-declared leader of the Libyan National Army’s (LNA) supporters consider him to be Libya’s “saviour,” while his critics on the other hand see him as another dictator, like Gaddafi, and an immediate barrier to political unity and national resolve.

Hafter was born in 1943 in the eastern town of Ajadbiya. He took part in the coup against Libya’s King Idris, that thrust Muammar Gaddafi to power in 1969. Shortly after Haftar became a top military officer for Gaddafi.

In the 1980s, Gaddafi appointed Haftar as commander of the Libyan forces in Chad. In 1987, Haftar was captured during the Battle of Wadi Doum along with 600-700 of his men. Shortly after the ill-fated battle, Gaddafi denied that Libyan troops were in Chad, and subsequently disowned Hafter and the rest of the captives. This betrayal led Haftar to resent Gaddafi and turn against him.

The United States arranged for the release of Haftar and his men from Chad and offered him political asylum in Virginia, where he lived comfortably in the US for over 20 years near the CIA headquarters in Langley. While in exile, Haftar joined Libya’s opposition, and it is believed that he was working closely with the CIA to help overthrow Gaddafi.  Haftar maintained ties to anti-Gaddafi groups.

2011 Libyan Revolution and The Rise of the Libyan National Army

General Haftar returned to Libya in March 2011 at the onset of the Libyan uprising against Gaddafi, and immediately became a prominent figure after joining the rebellion to overthrow the former dictator.

Haftar’s self-proclaimed Libyan National Army, though appearing to be national institution, is little more than a gl

orified militia consisting of a large number of former members of the Libyan army who fought against Gaddafi in 2011, and members from his own Farjani tribe.

The post-revolution transitional government wanted to regulate Libya’s various militias by having them register under the Ministry of Defense. Haftar seized the opportunity to legitimize his militia and immediately registered his force through the ministry, cleverly calling it Libya’s “National Army.”

The majority of those who supported him felt threatened by the rise of Islamist forces who sought to extinguish any leftover traces of Gaddafi’s old regime. Haftar also gained the support of the Zintan brigades in west, who shared his anti-Islamist cause.

After the toppling of Gaddafi, Haftar disappeared from the scene until February 14, 2014 when he reappeared on television calling for a coup d’etat against the General National Congress (GNC), the then elected parliament in Tripoli.

However, his dramatic appeal to overthrow the government was not taken seriously.

Haftar has been compared to Egyptian President Abdel Fattah El-Sisi who as commander of the Egyptian army overthrew the democratically elected Muslim Brotherhood President Mohamed Morsi in July 2013. Haftar, who maintains close ties with Sisi, also has made it his mission to crackdown on the Muslim Brotherhood and other Islamist groups in Libya.

General Khalifa Haftar was able to garner enough support from Arab nationalists, federalists, anti-Islamists, tribal forces, the Zintani brigades, and the armed forces within the LNA, to launch Operation Dignity on May 16, 2014 in the eastern city of Benghazi.

Haftar’s Operation Dignity, which was designed to eliminate Islamist factions from eastern Libya, particularly the Ansar al-Sharia in Benghazi,  was broadening to encompass all islamist groups operating in Libya, including ISIS and marked the beginning of the Second Libyan Civil War.

Only two days after declaring the campaign, anti-Islamist forces aligned with Haftar surrounded the parliament building in Tripoli and called for the dissolution of the GNC. Haftar and his supporters had a problem with the GNC, which was comprised of Islamist political parties, including the Muslim Brotherhood, members of the Berber ethnic group, and former revolutionaries from the city of Misrata.

Expunging all Islamist groups from Libya proved to be more challenging than Haftar originally planned, and Operation Dignity dragged on for over two years. However, Haftar still received an avalanche of support from groups who blamed Islamists for a wave of assassinations and attacks on military and security officers.Following an election on June 25, 2014, the GNC lost power and was replaced by the House of representatives (HoR). The Libya Dawn militia alliance formed partly in response to Haftar’s Operation Dignity and partly due to the outcome of the election, which was rejected by GNC allies. This fueled the Libya Dawn militia to drive out the Dignity-aligned Zintani brigades from Tripoli in July 2014 after an intense battle at the Tripoli International Airport.

The HoR, which garnered international recognition, appointed Haftar as the commander of the LNA in March 2015. Members from the GNC denounced the former Gaddafi ally as a “war criminal” and said his promotion would further intensify a power struggle that threatened to tear the country apart.

Haftar has frequently said that he has no interest in politics or power, however, he has repeatedly used his military power to influence politics. Haftar has expressed his disregard for the Libyan Dialogue, the United Nations, and the new unity government, which was established to aid in establishing national reconciliation and unite Libya’s various political and armed factions vying for power and control of the country since the ousting of former dictator Muammar Gaddafi in 2011.

Western powers have been conflicted on their stance toward Haftar.  While western countries share many of the same enemies as Haftar, such as Islamist extremists, they fear that the rogue general could undermine Libya’s fragile post-revolution civilian institutions and act on his own interests.

In addition, the Libyan people are also divided between those in the east who see Haftar as Libya’s only hope for stability and those who view Haftar as a dictator-in waiting.  Haftar and his supporters want to have influence over Libya’s future and they aim to accomplish this by appearing to be the strongest force to contend with in the country.

Haftar’s allies in the HoR have repeatedly delayed upholding their end of the Libyan Political Agreement (LPA), which was signed by all parties on December 17, 2015, and endorse the UN-backed Government of National Accord (GNA). They want Article VIII removed from the LPA, which stipulates that the Presidency Council is to assume the function of the Supreme Commander of the Libyan army.

Hafter and his allies in the HoR want to ensure that he maintains control of Libya’s army under the new government. In particular, Haftar and his supporters desire control over the Defence Ministry.

In early May, Haftar announced an offensive against ISIS stronghold Sirte, despite warnings from Prime Minister Fayez al-Sarraj to hold off on any separate campaigns against ISIS, stressing that a divided front would only benefit the extremist group. This defiant move highlights Haftar’s sole intention is to gain political leverage and recognition for defeating ISIS and perhaps that is why he announced that his army was only 10 kilometers away from Tripoli last week – to distract the GNA’s armed forces from the battle against ISIS.

Nevertheless, Hafter has decided to hold off on attacking Sirte, and instead launched Operation Volcano in the coastal city of Derna in order to allegedly liberate the city from terrorism and Islamist control. Derna’s Shura Council has openly opposed Haftar, and in April claimed that they were able to drive out ISIS from the city without the help of Haftar’s militia. Many view Operation Volcano to be a repeat of Operation Dignity, whereby Haftar went after any group who opposed him or who he believed to be an Islamist threat.

Haftar remains to be a divisive figure in Libya and is pushing the country toward even more fragmentation. It is clear that if Haftar does not get the position he wants in the new GNA, he will continue to obstruct Libya from moving forward as a unified country. In addition, as long as he continues to receive foreign backing and support from countries such as the United Arab Emirates and Egypt, Haftar will less likely be compelled to relinquish his power.