NAZI SIDE OF TRUMP AFFECTS CANADA-CBCNews

Those who think that Canada is the last bastion of liberal tolerance in the West should expand their political imagination beyond the halls of power — and in particular, take a look at what’s happening on Canadian campuses,  where there’s been a recent surge in right-wing and racist propaganda.

It may be true that the right wing in Canada has yet to cough up the same kind of populist threat now arising in European liberal democracies like France, Germany or the Netherlands. But the success of president-elect Donald Trump has emboldened nativist elements of Canadian society just the same.

And nowhere has this been more obvious than on Canadian university campuses.

In the past few months alone, posters, flyers and other paraphernalia promoting hard right slogans have been found on campuses across the country, including McGill, the University of Toronto, the University of Alberta and McMaster University, among others.

Some of these materials display outright racist messages. For instance, posters were found on the University of Alberta campus that read “Fu*k Your Turban.” And “White Students Union” advertisements were also found on several campuses in the Greater Toronto Area at around the same time.

This is a result of an emboldening populist wave following the election of Trump, an event that has also inspired several elected officials on the Canadian right to espouse a similarly populist message. 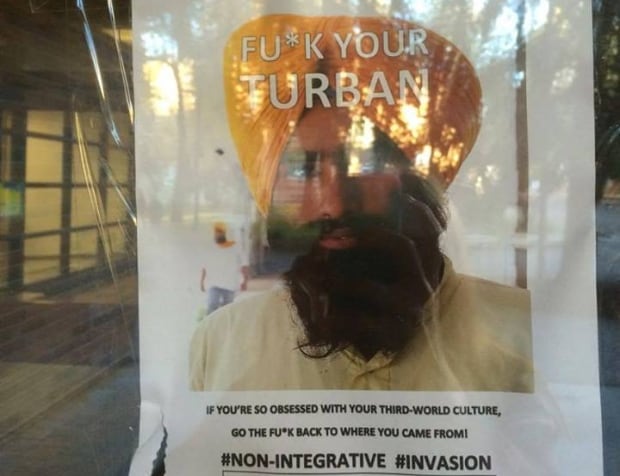 One of the xenophobic posters which appeared at the University of Alberta campus last September. (Laura Porter/Facebook )

The campus propaganda is a sign that this wave has reached an outer fringe of the right wing that’s looking to regain a certain kind of footing among the youth.

Universities are, to an extent, a microcosm of the wider society. They’re supposed to encourage the free exchange of ideas — a principle that can be exploited to facilitate movements that centre on hardcore populist ideas such as, say, regaining lost Canadian values in the age of immigration and refugees.

There has been a re-normalization of these kinds of messages and sentiments, which come on the heels of a rebranding effort by many hard-right groups or circles to re-orient their often white nationalist messaging into a socially acceptable platform that centres on issues like terrorism, immigration, and law and order.

White nationalist sentiments are reconstituted as efforts to combat “anti-white racism” and the destruction of Western civilization (see, for example, “white students unions”).

The convergence of these trends has facilitated the insertion of the term “alt-right” into popular consciousness. It’s a term usually attributed to Richard Spencer, himself an open white nationalist who prefers three-piece suits to biker jackets.

Thus, the urge to marginalize multicultural norms and to curb open-society principles is no longer displayed in plain terms. Rather, it’s captured and expressed by slogans like “make Canada great again,” a direct reference to Trump’s campaign mantra displayed on posters found on the McGill campus just last month.

Similarly, denouncements of racialized or minority communities’ vocal advocacy (like the Black Lives Matter movement) are now veiled by a decrying of “anti-white racism.” Flyers reading “Tired of anti-white propaganda?” were just found on McMaster’s campus last November. The list goes on.

This adjustment in messaging isn’t new, but an updated form of it is being employed in light of Trump’s victory. That some of the more extreme and explicit forms of this rhetoric are being found on campuses is alarming. It’s a sign that whoever’s responsible is looking to young people for a response and to campuses as a possible setting for mobilization.

University administrations and student unions have condemned the dissemination of this kind of propaganda, but it will likely take more than tweets and press releases to stem the growth of such messaging on campuses. 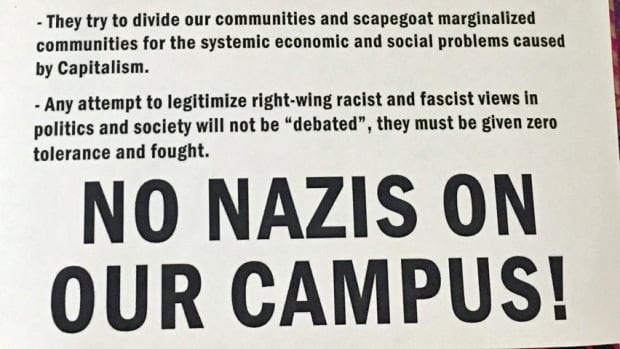 Flyers like this appeared on the McMaster University campus in November 2016, after other flyers promoting an extreme alt-right website were torn down. The university also removed these posters, which equated the alt-right with neo-Nazism. (David Vandenberg)

It’s unclear as yet whether this kind of reverberating messaging has reached its limits. If not, these signals will continue to reach — as shown by the propaganda found on campuses — an outer section of the hard right that, even in today’s climate, remains somewhat closeted and fringe.

These are the out-and-out racists who’ve been skirting the edges on white nationalist and neo-Nazi websites like Stormfront and the underground. Their presence was also felt right around the time Trump was elected as figures like David Duke, a former KKK grand Wizard, came out last November to express joy for the Republican victory.

Things have not reached such an extent in Canada, but it’s still worth noting certain signs may indicate what’s to come, such as the emergence of a KKK recruitment drive in B.C. last year.

The full mobilization of this “alt-right” network would be possible in the event a successful populist campaign is run by a right-wing candidate in Canada’s next general election. That person would almost certainly come out of the Conservative Party, as candidates like Kellie Leitch and Chris Alexander are already testing the waters.

This will mean that Canada’s institutions will also be tested for their resilience against a hard turn to the political right, if such a thing were to happen.

But to think that the current populist wave has permanently missed Canada is to ignore the obvious.

Steven Zhou is a Toronto writer who has experience in human rights advocacy.