DefenceAviation-For a country that used to import even a toothbrush before, Iran has been making giant strides in industry and indigenously produced components. Recently, on the country’s Defence Industry Day, President of Iran, Hassan Rouhani, had unveiled the first domestically produced Turbojet engine “Owj” (Zenith), in a prestigious ceremony attended by press officials, industry experts, and scientists of the nation. 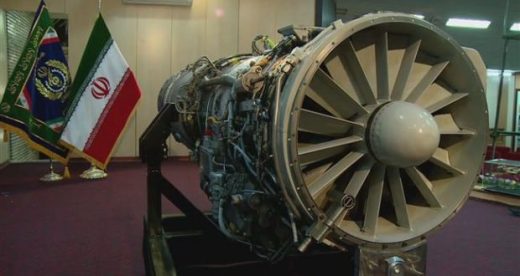 The President of Iran has described this achievement as a bridge between industrialised nations and developing countries. The “Owj” turbojet engine is one of the most complicated components produced for the aviation industry in Iran. It was built without any foreign technical assistance in regards to its hardware and software.
This puts Iran in the elite list of 8 countries that are capable of producing such high-end aircraft engines through indigenous technology and makes a breakthrough in the county’s defence and aviation industry. The engine, which was designed and manufactured by the country’s leading scientists at the Defence Industry’s organisation, is now slated to be pressed into mass production.
The “Owj” is one of the most sophisticated products to be produced in Iran and will go a long way in decreasing the country’s dependence on foreign technology and aircraft engines. The engine comprises of 14,000 individual components and can operate at an altitude of 50,000 feet in various climatic conditions. Its approximate takeoff weight is around 10 tonnes which, is more than sufficient to power the multirole fighter jets of the Iranian Airforce
This engine serves as a benchmark for the manufacture of subsequent jet engines that the country hopes to continue designing and building. Iran is now poised to look forward to a new generation of light aircraft and heavy-duty planes based on the “Owj” turbojet. Here’s a more close look at how the “Owj” turbojet engine works.
Turbo Jet engines are air-breathing engines used in aircraft and ballistic missiles. It is constructed with a gas turbine and propelling nozzle, with the gas turbine consisting of an air inlet, compressor, combustion chamber and an exhaust chamber. The turbine powers the compressor, which compresses air and heats it with burning fuel in the combustion chamber. The hot gases are the allowed to expand in the turbine. The turbine exhaust gases then expand through the propelling nozzle where it accelerates to high speeds providing the necessary thrust. This essentially works on Newton’s Third Law of Motion “Every Force Has an Equal and Opposite Reaction Force”.
Variations of the Turbojet exist, such as the Turboprop which has a propeller attached to the compressor assembly, and Turbofan where a ducted fan accelerates air using energy from the turbine. Although Turboprops and Turbofans are quieter and more fuel efficient, turbojets are used in aircraft and supersonic medium range cruise missiles, because of their high speed of exhaust gases, the simplicity of construction and reduced cross sectional area.

jet_engine
Let’s break down the individual parts. The inlet or air intake is placed directly in front of the compressor at the front of the engine assembly. It helps direct incoming air, which is cold and at low temperature, into the rotating compressor blades. The air is flowing at subsonic speeds regardless of the actual speed of the aircraft or vehicle.
The compressor, which is driven by the turbine, then takes this cold and low-pressure air and compresses it, increasing both pressure and temperature. Typical rotational speeds are around 2,500 RPM while compressors of smaller helicopter engines spin at a mind-boggling 50,000 RPM. In contrast, the internal combustion engine of a car spins at around 6,000 RPM. From the compressor, the air now moves into the combustion chamber.
Fuel is introduced into the combustion chamber, and burning of the fuel-air mixture takes place. The burnt gases flow through the turbine causing it to spin at high speeds. The turbine is placed on the same shaft as the compressor and in turn causes the compressor to draw in more air to the chamber in a reciprocating process.
The penultimate stage consists of a Turbine where hot gases expand through the chamber. Air from the compressor is used in this stage to cool the turbine blades and vanes. Enormous horsepower is developed in the turbine which drives the compressor and auxiliary accessories such as the fuel, oil and hydraulic pumps that are driven via a gearbox.
The final stage consists of the nozzle, where gases expand through the exhaust and produce a jet of air at high velocity. The convergent ducting narrows down to a throat to provide the necessary thrust for the engine. A combustion chamber can be added in this stage to further reheat the turbine exhaust gases, and this is known as an after-burner. Afterburners are used to produce supersonic flight speed in aircraft. The typical thrust produced by this type of engine is 115,000 lbf (510,000 Newton).
Iran’s Ministry of Defence officials have stated that this achievement has elevated the country’s status and placed them in the higher ranks not only in the Middle-East region but the entire world. It has increased national confidence regarding the youth’s superior technical knowledge, design and manufacturing capabilities. They expressed that the next step is to accelerate this process to increase defensive capabilities and protect the country’s airspace.

Collecting, translating, producing, and disseminating open source information that meets the needs of policymakers, the military, state and local law enforcement, operations officers, and analysts through-out Governments.
View all posts by CHAINSOFF →
This entry was posted in DEFENSE INDUSTRY, Uncategorized. Bookmark the permalink.