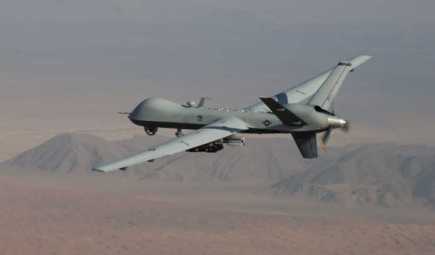 The MQ-9s integrated with fourth-generation platforms, such as F-15 Eagles and F-16 Falcons, from various U.S. and allied forces in realistic combat training scenarios designed to test and challenge each and every aircrew and their platform.

“Red Flag 17-2 is a coalition exercise including multiple NATO assets,” said Maj. Dan, 89th ATKS assistant director of operations. “For MQ-9s, our role in this exercise was focused primarily on air interdiction, strike coordination and reconnaissance and dynamic targeting.”

The crews flew as enemy “red air” adversaries and coalition “blue air” during the exercise. When flying as red air, they provided air interdiction against blue air. When flying for blue air, the crews struck simulated weapons facilities and command and control nodes.

The exercise design provides aircrew an opportunity to practice in a contested and degraded operating environment forcing platforms to coordinate and integrate each of their assets’ unique capabilities to ensure overall mission success. Because it is a relatively new platform, it’s important to understand and demonstrate the MQ-9’s unique capabilities.

He went on to say during the mission planning stage the crews ensured other platforms understood MQ-9 capabilities to guarantee successful integration.

Dan added one of the biggest challenges was contesting the notion that MQ-9s are solely intelligence, surveillance and reconnaissance assets, when in reality, precision attack capabilities are a primary mission of the MQ-9.

Having the opportunity to mission plan with other assets, both national and multinational, allowed coordinated air supremacy by blue air.

“We don’t usually get to mission plan with everyone on a daily basis and have that face-to-face interaction, which is critical,” David said. “We’re flying real-world combat operations every day and integrate with other services and platforms, but having the ability to train with them and really understand their capabilities fully to integrate in the joint fight efficiently is extremely valuable.”

Since not every aviator will have the ability to train in such a dynamic environment, Dan explained the importance of playing with a common goal in mind.

“When we go to exercises like this, our squadron doesn’t stand down any combat lines,” Dan said. “The aircrew who get the experience take what they learned and present that knowledge to the rest of the squadron.”

“We’re busy taking the fight to our enemies overseas, but Red Flag prepares us for the next fight,” Dan said.