In April of 2013, Time magazine obtained a video that had been smuggled out of Syria by a “rebel fighter.” Aryn Baker writes for Time magazine, May 12, 2013:

In the video a man who is believed to be a rebel commander named Khalid al-Hamad, who goes by the nom de guerre Abu Sakkar, bends over the government soldier, knife in hand. With his right hand he moves what appears to be the dead man’s heart onto a flat piece of wood or metal lying across the body. With his left hand he pulls what appears to be a lung across the open cavity in the man’s chest. According to two of Abu Sakkar’s fellow rebels, who said they were present at the scene, Abu Sakkar had cut the organs out of the man’s body. The man believed to be Abu Sakkar then works his knife through the flesh of the dead man’s torso before he stands to face the camera, holding an organ in each hand. “I swear we will eat from your hearts and livers, you dogs of Bashar,” he says, referring to supporters of Syrian President Bashar Assad. Off camera, a small crowd can be heard calling out “Allahu akbar” — God is great. Then the man raises one of the bloodied organs to his lips and starts to tear off a chunk with his teeth.

IS he a “Kuru” disease Carrier?

“KURU” REASON FOR CANNIBALISM IN SYRIA:   This suggests that the Kuru of the infected Syrian men would have been transmitted BEFORE the civil war. Kuru is a very rare, incurable neurodegenerative disorder which was prevalent among the Fore people of Papua New Guinea in the 1950s and 60s. Kuru is caused by the transmission of abnormally folded prion proteins, which leads to symptoms such as tremors, loss of coordination, and neurodegeneration. 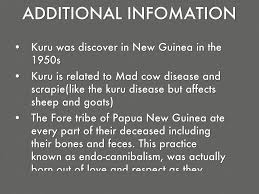 The term kuru derives from the Fore word kuria or guria (“to shake”),[1] due to the body tremors that are a classic symptom of the disease and kúru itself means “trembling”. It is now widely accepted that kuru was transmitted among members of the Fore tribe of Papua New Guinea via funerary cannibalism. Deceased family members were traditionally cooked and eaten, which was thought to help free the spirit of the dead. Females and children usually consumed the brain, the organ in which infectious prions were most concentrated, thus allowing for transmission of kuru. The disease was therefore more prevalent among women and children.

The disease has lingered due to kuru’s long incubation period of anywhere from 10 to over 50 years. The epidemic has declined, however, from 200 deaths per year in 1957 to 1 or no deaths annually in 2005. Until Syrian civil war began in 2011. Where Two TIME reporters first saw the video in April in the presence of several of Abu Sakkar’s fighters and supporters, including his brother. They all said the video was authentic. We later obtained a copy. […] These 27 seconds of footage provide a glimpse at how brutal the Syrian war has become….

Figure 8. A young Fore girl in terminal stage of kuru, held by her father. Intravenous and tube feeding permitted her to live on to this advanced stage of disease at the Kuru Hospital, whereas in the village she would have been smothered by her relatives earlier, since her inability to swallow without aspiration of food or water would have caused her otherwise to starve and thirst to death. DCG-57-PNG-1136. Courtesy of late D. Carleton Gajdusek.

Figure 9. A child with advanced kuru who could neither stand nor sit without support. Courtesy of late D. Carleton Gajdusek.

Figure 10. Three kuru patients at the kuru hospital in Okapa requiring support to stand erect. The Fore adolescent supporting the patient on the right, himself had incipient kuru and died within one year. The other two died within six months. Courtesy of late D. Carleton Gajdusek.

Sagawa was a Japanese student completing an English Literature degree in Paris. He met and then shot a co-ed on June 11, 1981. After her death, he proceeded to cannibalize her over the next two days. Sagawa was eventually arrested by French authorities but deemed unfit for trial due to insanity and was deported. In one of the worst examples of injustice in legal history; a paperwork error allowed Sagawa to simply check himself out of a mental institution after a little more than a year of confinement. He is now a free man living in Japan.