Clare Lopez–The Iranian regime’s nuclear weapons program, born in secrecy and kept hidden for years, has never skipped a beat and today continues on course in underground and military facilities to which inspectors have no access. On 21 April 2017, the National Council of Resistance of Iran (NCRI), the oldest, largest, and best organized democratic Iranian opposition group presented startling new evidence that the jihadist regime in Tehran is violating the terms of the JCPOA (Joint Comprehensive Plan of Action) agreement reached in July 2015 among the P-5 +1 (Permanent Five Members of the UN Security Council plus Germany), the IAEA (International Atomic Energy Agency), and Iran.

As will be recalled, it was the NCRI that first blew the lid off Iran’s clandestine nuclear weapons program in 2002, at a time when it had been in progress for at least fourteen years (since 1988), unbeknownst to most of the world, including the IAEA. Virtually all of the Iranian nuclear sites now known publicly were only retroactively ‘declared’ by the mullahs’ regime after exposure: the Natanz enrichment site, Isfahan conversion site, Fordow enrichment and Research and Development (R&D) site, Lavizan-Shian, and more. Regularly corroborated additional revelations since 2002 by the NCRI have built a record of credibility that should prompt a closer official look at these new reports by the U.S. State and Defense Departments, National Security Council (NSC), and White House.

Alireza Jafarzadeh, deputy director of NCRI’s Washington office, provided a devastating expose of the ongoing activities of the Organization of Defensive Innovation and Research (SPND), the Tehran-based element of the Iranian Ministry of Defense that has primary responsibility for the regime’s nuclear weapons development. The SPND, established in February 2011, was officially sanctioned by the U.S. Department of State in August 2014 for engaging in nuclear weapons R&D.   Mohsen Fakhrizadeh(aka Dr. Hassan Mohseni), the founder and director of the SPND and a veteran IRGC (Islamic Revolutionary Guards Corps) brigadier general, was designated individually under UN Security Council (UNSC) Resolution 1747 in 2007 and by the U.S. in July 2008 for his involvement in Iran’s proscribed WMD activities. Despite these designations, and the IAEA’s failure to resolve the many critical indicators of “Possible Military Dimensions” related to Iran’s nuclear program as specified in the November 2011 IAEA Board of Governors report, the July 2015 JCPOA inexplicably lifted sanctions against the SPND. 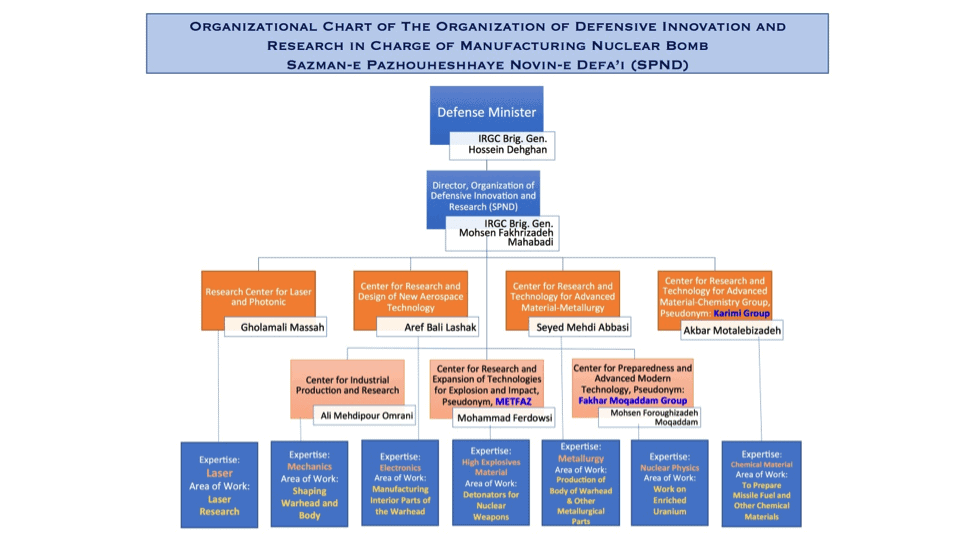 It is hardly surprising, then, to learn that the SPND not only continues critical weaponization research involving nuclear warheads, triggers, and explosives, but has expanded that work at each of seven subordinate locations. One of these, revealed by the NCRI in 2009 but never declared to the IAEA, is the Center for Research and Expansion of Technologies on Explosions and Impact (Markaz-e Tahghighat va Tose’e Fanavari-e Enfejar va Zarbeh or METFAZ), which works on triggers and high-impact, non-conventional explosives. The current METFAZ director is a Ministry of Defense engineer named Mohammad Ferdowsi, whose expertise is in high explosives. Ferdowsi also serves as chairman of the board of directors of the High-Explosive Society of Malek Ashtar University (affiliated with the Defense Ministry).

After conclusion of the July 2015 JCPOA, much of METFAZ’s personnel and work was moved to the Parchin military facility for better cover and security. Parchin Chemical Industries, an element of Iran’s Defense Industries Organization (DIO), was sanctioned by the U.S. Department of the Treasury in 2008 for importing “a chemical precursor for solid propellant oxidizer, possibly to be used for ballistic missiles.” Parchin is the location where the IAEA long suspected Iran was conducting test explosions for nuclear detonators. In October 2014, Iran finally admitted to using Parchin to test exploding bridge wires, but implausibly claimed they were not for weapons development. Equally incredibly, the IAEA concluded a secret side deal with Iran that allowed it to collect its own samples at Parchin—in which the IAEA in fact did find evidence of enriched uranium. But despite that and more evidence, the JCPOA was concluded and sanctions against Parchin Chemical Industries were lifted.

Within Parchin are twelve separate military and missile complexes. According to the NCRI’s new information, METFAZ has established a new location within one of these that is near the center of Parchin and referred to simply as the “Research Academy” in SPND internal communications. Located on the sprawling Parchin complex some 30 miles southeast of Tehran, the new METFAZ center is called the Chemical Plan of Zeinoddin and is located in a section called Plan 6. It’s completely fenced in and protected by heavy security under control of the IRGC’s Intelligence Service. What goes on there is concealed from the IAEA, and likely with good reason.

Old and New Locations for the SPND

Lambasting the Iranian regime for its ongoing regional aggression and support to terrorist organizations, as Secretary of State Tillerson did on 20 April 2017, is certainly a step in the right direction. Noting that after ten years, Iran can break out and build all the bombs it wants is also a useful observation. But neither of those comes close to fulfilling the Trump campaign pledge to “rip up” the JCPOA – or hold Iran accountable for its violations of the JCPOA. Secretary Tillerson’s 18 April letter to U.S. House of Representatives Speaker Paul Ryan, certifying that Iran was in compliance with the 2015 deal, simply cannot be squared with the NCRI’s latest revelations, which it has shared with both the U.S. government and the IAEA. Indeed, the independent Institute for Science and International Security (ISIS) issued a March 3, 2017 report in which it explicitly states about the IAEA’s 24 February 2017 Quarterly report, “Nowhere in the report does the IAEA state that Iran is fully compliant with the JCPOA, and it should not make that judgement.”

The real problem with the JCPOA—and why it needs to be ripped to shreds—is not what’s in it: it’s what’s been left out or exempted in any number of secret side deals that the U.S. and IAEA concluded with the Iranians. Among critical issues either explicitly permitted or simply not covered in the JCPOA are the following:

Collecting, translating, producing, and disseminating open source information that meets the needs of policymakers, the military, state and local law enforcement, operations officers, and analysts through-out Governments.
View all posts by CHAINSOFF →
This entry was posted in WMD. Bookmark the permalink.