They are like the infamous images from Abu Ghraib prison, only worse. Iraqi civilians in Mosul facing rape, torture and murder from members of their own army who had retaken the city from the Islamic State.

“They are the most sinister, upsetting pictures I have seen in my entire life,” the veteran BBC war correspondent Jeremy Bowen said of the images taken by Kurdish photographer Ali Arkady.

This weekend the brutal series of pictures called “Kissing Death” Arkady took last year while embedded with members of an Iraqi special forces unit, won France’s top prize for war correspondents.
The photographs were not just “really strong” said Bowen, who chaired the Bayeux-Calvados jury, “they were evil”. But it wasn’t only their content that disturbed the jury.

Arkady, 34, admitted to being pressured into hitting two suspects during a torture session to save his own skin, actions of which he said he was “not proud”.

But other war photographers asked whether a line had been crossed?

While Bowen insisted that “the service he did by taking those pictures is more powerful that the fact he made some mistakes”, others were not so sure.

Another member of the jury, who asked not be named, told AFP that he was disturbed by the ethical issues the ‘shocking’ pictures raised. “The story is not clear. A lot of people think he has been very brave in telling this story… but I think we are not sending the right message in rewarding this type of work,” he added.

Arkady was forced to flee Iraq with his family earlier this year, bringing with him images and films which he said proved war crimes were committed by the Emergency Response Division [ERD] which he had followed for two months.

Arkady said he kept working with the unit after the torture began partly from guilt because he had painted the soldiers as heroes in an earlier report for the US television network, ABC.

“What began for Ali as a positive story about Shia and Sunni Iraqi soldiers fighting on the same side against a mutual enemy, turned into a horrific journey that included torture, rape, killing and thieving of innocent Iraqi civilians by the ERD,” said the US-based photo agency, VII, who helped get him out of Iraq.

“I’d seen two heroes (the unit’s commanders) do something bad,” Arkady told AFP. “They started torturing people, raping women. Everything changed in my mind. I was confused. I decided to investigate more.” 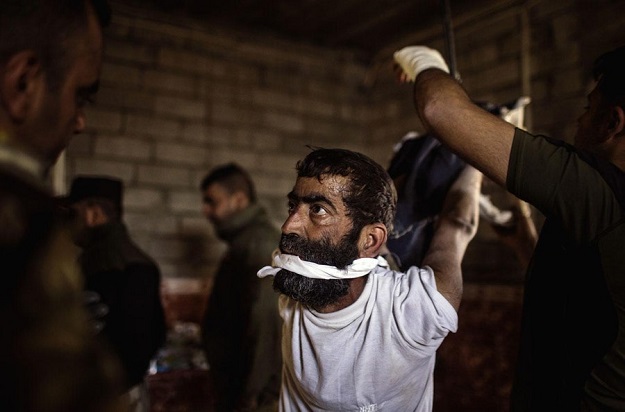 Bowen, who has spent decades reporting from the Middle East, said the fact that Arkady had exposed abuses that would otherwise have gone unreported was the overriding factor. “I think it is very important he admitted the mistakes he made. In moral terms, he is not a torturer,” he told AFP.

Award-winning British war photographer Sean Smith of The Guardian, who was not on the jury, said he “would not condemn” Arkady either.

For him, however, “the system which put him in that position – where often inexperienced locally hired freelance ‘stringers’ provide the coverage” from dangerous war zones, is the real problem.

“The whole thing has got so compromised because major news organisations are sending fewer and fewer experienced people,” he said. “There is no one there. Virtually all the coverage is coming from stringers and social media.”

Stringers often go “from not covering anything to covering extreme stuff. They just feed the machine” of photo agencies that want to show “they are still in the business even if they don’t cover most things anymore. “And then when something goes wrong, the guy becomes a scapegoat and everyone becomes very self-righteous.”

VII co-founder Gary Knight told AFP that the agency did not know what Arkady had uncovered while he was working on the story. “We did not pressure Ali to publish the images, the opposite is true,” said Knight.

“We suggested that he think long and hard… because we knew that he would have to leave the country for his own security – possibly forever – if he did,” he added. 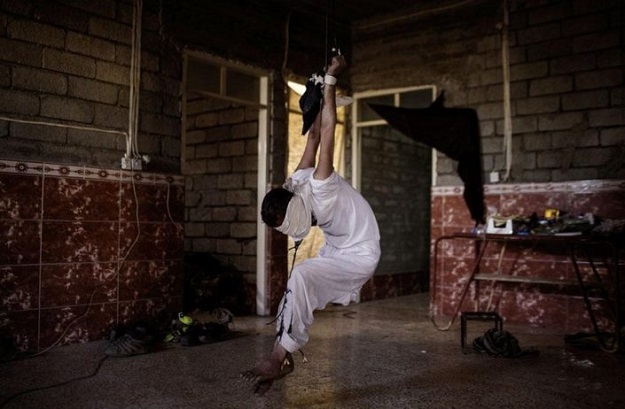 Knight said he and the agency’s other acclaimed war photographers Christopher Morris and Ron Haviv had mentored “Ali for years to offer him support and advice”.

Smith said although Arkady should not have taken part in torture, photographers were sometimes put in desperate positions.

“If you go with people like that you can’t say, ‘I don’t agree with what you are doing.’ You blend in and disappear, you may even end up getting drunk with them.”

For there is always “a very real danger you can end up dumped by the side of a road with a bullet in your head”, he said.