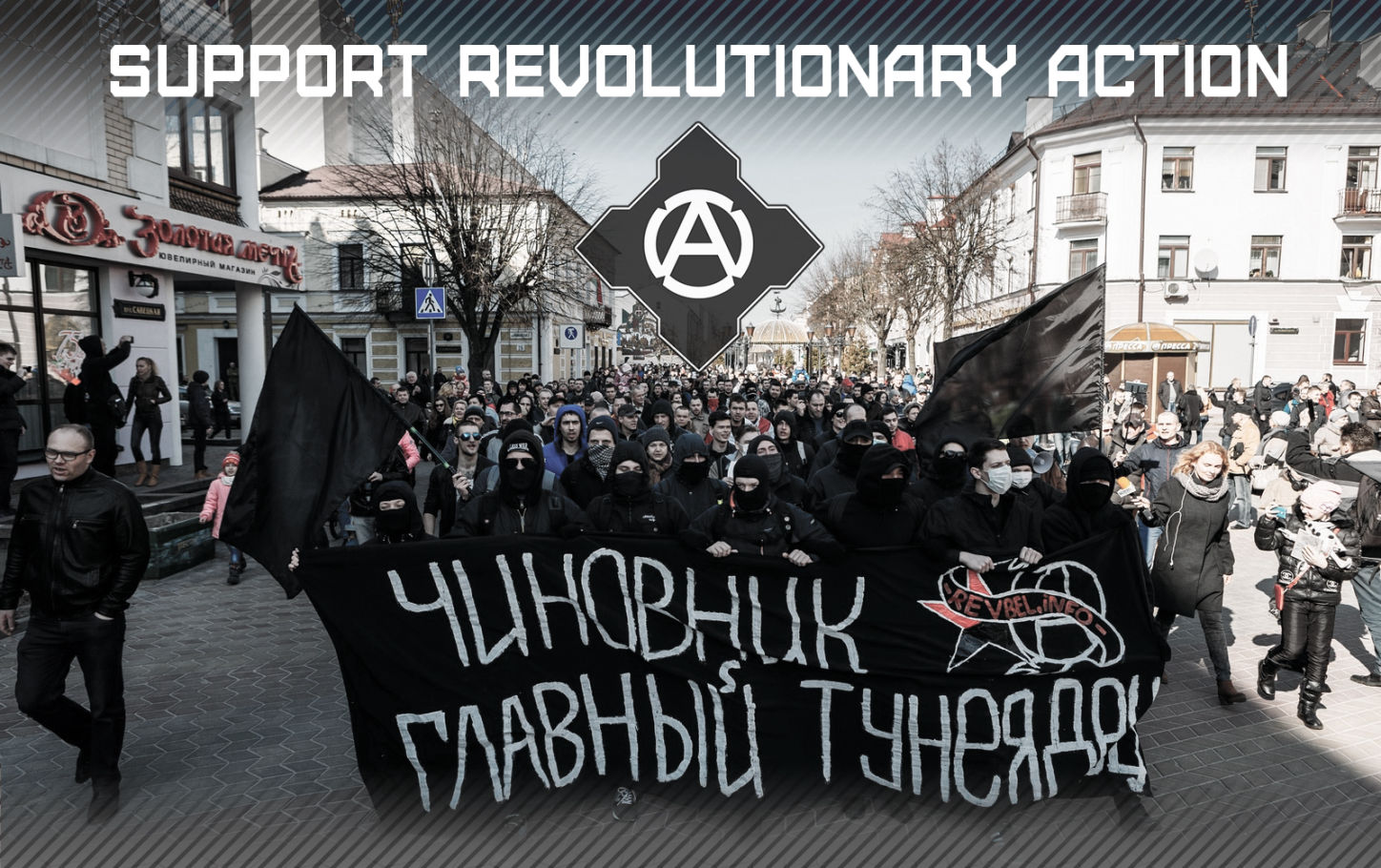 Salute, dear comrades all around the world!

We are anarchists from the organization called Revolutionary Action from Belarus. Our main goal is anarchy worldwide, our main method to reach it is social revolution, our current activity is class struggle, agitation on the streets and the development of our own media.

Our principles are: illegalism, anarcho-communism, revolutionary anarchism. We are close to neoplatformism practice, which was developed by the anarchists from Rio de Janeiro. We veil our names and the participation in the organization, we don’t sign any action with our organization name.

We have been organized since 2005 and we are still active. There was a big wave of repressions against us in 2010, but it didn’t stop us. Our comrades made symbolic actions, for example in this video you can see all activities of our close comrades in 2016:

Starting from February there has been the biggest wave of protests for almost ten years in Belarus. People of different ages and occupations went out and said their “NO” to Lukashenko and his dictatorship on the streets of their cities. The reason for these protests was the new tax for unemployed people, but people started to demand not only the abolishment of this tax: people were saying about big social changes. One of the main object of protesters’ critics was the police staff in Belarus. Belorussians are really tired of the special police that seize their neighbors and relatives. Belorussian people are tired of KGB, new aristocracy and the elite of Belorussian society, with their corruption and total control.

Our collective supports the struggle of ordinary people for their rights. We think that the main recipe to win the battle against the police state are the organized and radical groups of people, which struggle on their places with different ways: workers with strikes, students with agitation and symbolic actions. And all of them with radical methods – from small group attacks to clashes with police on the streets.

Our comrades at first took part and then headed the march in Brest on the 5th of March.

We also tried to call people to protest more frequently on the 18th of March.We called people to join us in the protest on the 25th of March, which was brutally broken up by police forces.

But, the state knows our position well and try to don’t give us any chance to send our message to people. Our main web-domain was blocked in Belarus (revbel.org). After that, police blocked our four mirrors (revbel.ga, revbel.info, revbel.net and revbel.cc), which were created for people, who don’t know how to use Tor or VPN. Also the government censored our main social network page and group in Russian social network called VKontakte (https://vk.com/rdbelarus and https://vk.com/revbelorg). Now it’s impossible to reach it from any Belarusian IP. Nationalists and politicians ignore our existence and activity. Their media don’t publish anything about our actions and calls – so we try to reach more people through social networks.

In april we also have faced with censorship from Facebook side. They have blocked administator account of facebook.com/revbelarus

Our comrades always have a chance to be arrested and sentenced to administrative arest (till 25 days) or even criminal sentences (Belorussian police can fabricate fake criminal proceedings and sentence people for maximum 3 years of prison for fake preporations for “mass disorders”).

We started our own project, where people from Belarus can add any police officers, state propagandists, judges or bureaucrats with info about them. We are collecting the information about their addresses, telephone numbers, social network pages, photos and videos. The project is called Banda Luki (Gang of Lukashenko): https://bandaluki.info (only russian), now it’s also blocked in Belarus.

We have also developed the application for Android to bypass the censorship and which uses Orbot, VPN or our mirror. It is avaliable now in Google Play in English.
https://play.google.com/store/apps/details?id=com.news.revbel&hl=en

It’s rather a difficult period for our country nowadays. We need much more than our salaries can give us to win this battle with a well-armed police structure.

1 Response to UPDATED: WHEN BELARUS TALKS….