The ‘missing’ muslim regiment: Without rebuttal, pakistani propaganda dupes the gullible across the board

indiandefence–Standing between Pakistani propaganda and the Indian nation can be a full time job, especially when it comes to issues about Indian Muslims. It is an enshrined doctrine in Pakistan that India’s fault lines will remain its Achilles heel. The recent controversy – generated by crude video clips inserted into social media networks and reinvigoration of a Pakistani media article of March 2010 – is nothing but a ham handed but potentially mischievous campaign by Pakistan’s Inter Services Public Relations (ISPR). It’s an issue very few in India know much about: Indian Muslim presence in India’s armed forces and issues concerning alleged disloyalty to the nation, on which across the board gullibility is very high. The essence of the Pakistani disinformation is that a Muslim Regiment existed in the Indian Army till 1965, but was disbanded because in that conflict 20,000 Muslims refused to fight Pakistan.

Thereafter not a single Muslim participated in the 1971 conflict (another lie). Secondly, the percentage of Muslim servicemen as per the article is drastically below the ratio of Muslim population in India. The March 2010 article is more academic, highlighting research by an Indian Muslim scholar in the US who finds no rationale for this or for absence of reservation for Muslims in the armed forces.

Such projections obfuscate reality on the ground. Post-Independence, majority of Muslim officers and soldiers migrated to Pakistan, leaving a minuscule minority as the core or seed element of Indian Muslim servicemen distributed in different regiments and units. In that context new Muslim, Christian or Buddhist regiments made no sense as ethnic and regional identity took priority over faith as entities of representation. However, sub units comprising only Muslims do exist in many units of the Grenadiers, the Rajputana Rifles, Rajput Regiment and some cavalry regiments.

There was no Muslim Regiment ever and certainly not in 1965. But Muslims fighting as part of multi class regiments proved their absolute commitment and worth. Abdul Hamid’s Param Vir Chakra, although a legend, is insufficiently recalled today. Major (later Lt Gen) Mohammad Zaki and Major Abdul Rafey Khan both won the Vir Chakra, the latter posthumously even as he battled the Pakistani division commanded by his uncle, Maj Gen Sahibzada Yaqub Khan.

Such were the legends of Muslim warriors in 1965. The same followed in 1971. In later years Muslim bravehearts of the Indian army proved their mettle in Kargil and in fighting terror groups in J&K. Three army commanders, three corps commanders and a number of two star generals make up the community’s share of achievements in higher ranks.

The public needs to be educated on two aspects of manning in the Indian Army to counter Pakistani ‘psyops’. First, officer ranks. A commissioned officer goes to any regiment or unit irrespective of his ethnicity or faith or that of the regiment. He could be in command of mixed ‘All India All Class’ troops or of a sub unit comprising a single ethnicity.

I, a Muslim, was commissioned in Garhwal Rifles, a pure Hindu regiment with recruitment base only in Garhwal in Uttarakhand. Simply put, the faith of my troops became my faith; similarly their culture, language and food habits have never left me. Indian army officers uniquely remain comfortable with this arrangement, as do their families; it is an ethos not many Indians understand let alone Pakistanis who have never shared a bench or a tiffin box with people of another faith.

Manning below officer ranks is slightly different. Based upon social parameters each state has a recruitable male population (RMP) index. This is based upon the age profile and educational qualifications of the male population among other parameters. There is no reservation based upon profiling by faith, class, caste or ethnicity.

Rightly, in a diverse society the percentages by profile are not revealed as these will always become a subject of controversy which the close brotherhood of the uniform can ill afford. No doubt the Muslim representation at both officer and below officer level may not match its percentage of the population. But efforts to improve that are an ongoing phenomenon as education profiles and awareness improve.

In the officer cadre in particular, since it is open competition, regions with stronger education and awareness profile do have greater population percentage qualifying to be officers. Awareness makes a major difference and that is where the system may have erred in insufficient confidence building among some segments.

In my tours to educate various backward classes on opportunities i have been stumped by Muslim response, when they refuse to believe there is a place for them in the Indian army. Even the case of my own family, where father and son both became generals, is not easily believable by many Muslims.

This perception is exploited by Pakistan, with the additional misperception that it is not easy for them to follow their culture and faith in the forces. Exactly the opposite is true. The essence of India’s plural faith and culture is best symbolised by the armed forces but the projection of that to the recruiting base has been insufficient.

The ease with which Pakistan’s ISPR can exploit non-issues and half truths to advantage for its ‘psyops’ is a reflection of our studied weakness and longtime inability to develop a better communication strategy. More awareness among Indian Muslims and garnering the clergy in social outreach about the opportunities that India has to offer will go far in neutralising Pakistan’s intent. 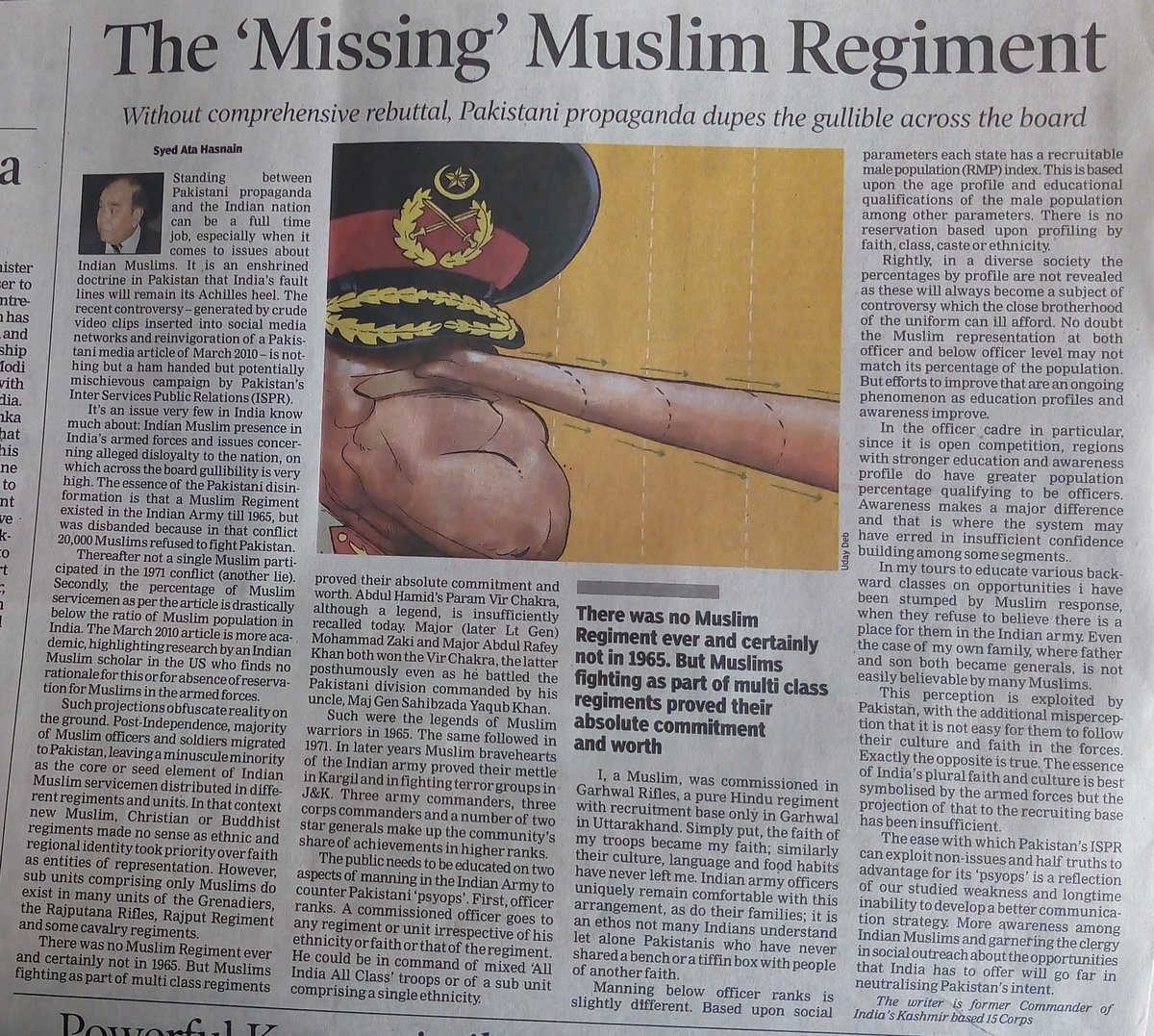 1 Response to The ‘missing’ muslim regiment: Without rebuttal, pakistani propaganda dupes the gullible across the board